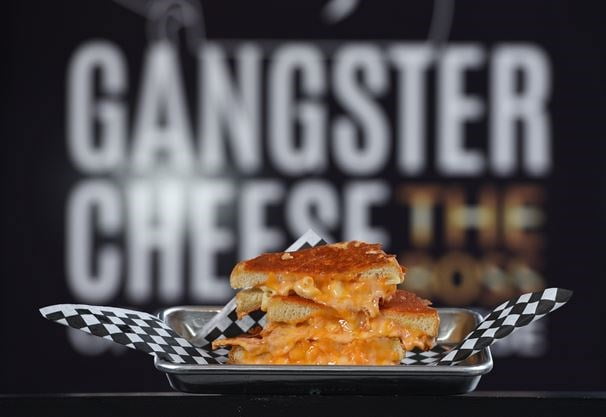 Article from WHATSON Jan 13, 2019 by Jillian Follert  Whitby This Week

WHITBY —The perfect grilled cheese is both an art and a science — and the owners of downtown Whitby’s newest restaurant think they have it just right.

“Making a perfect grilled cheese is harder than what people assume,” says Matthew Mahorn, who owns the restaurant with his wife Margaret.

“It creates that extra crispness and a nice crust,” Mahorn explains.

The method dates back to when he worked at Denny’s as a teenager — it’s how he would make a grilled cheese for himself on his break. 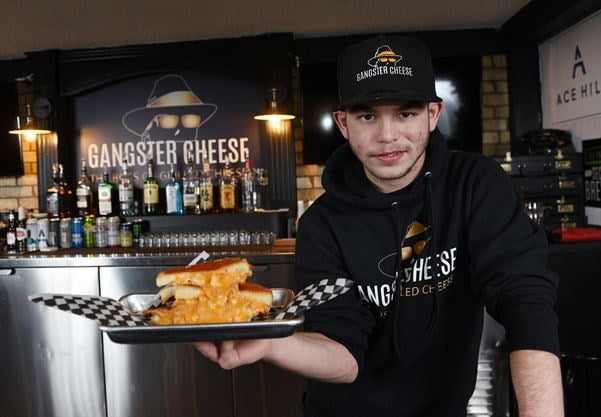 Gangster Cheese recently celebrated its grand opening in downtown Whitby at 112 Colborne St. E. The restaurant specializes in grilled cheese and has more than a dozen kinds on the menu, including the Mac ‘n Cheese grilled cheese. – Photo: Ryan Pfeiffer/Metroland

The 16 types of grilled cheese on offer at Gangster Cheese include the “Breakfast Lovers” with onion, bacon, egg, mushroom and tomato sandwiched between French toast bread; and a nacho option filled with salsa, taco seasoned ground beef, pure cream and jalapeños.

Mahorn says the “people’s favourite” is the “McGangster,” a take on the Big Mac made with ground beef, smoked bacon, dill pickles and “gangster sauce.”

The Gangster Cheese location on Colborne Street East — formerly home of the Crown and Firkin pub — may be new, but the Mahorns have been serving up grilled cheese in Durham and across the GTA for more than two years, out of a popular food truck.

The truck launched in 2016 and got its start parked outside the Canada Carpet store in Whitby.

It wasn’t long before there was a request to cater a wedding, and word of mouth grew from there.

The Gangster Cheese truck quickly became a fixture at community events of all sizes, from ribfests and Food Truck Frenzy, to office parties and music festivals.

“People have been asking for awhile for a stationary truck or location,” says Mahorn of the decision to open a brick and mortar restaurant. “It’s going to take patience waiting for word of mouth so people know we’re here…we’re excited to be part of downtown Whitby.”

The food truck will be back in action later this winter — and there are plans to add a second truck this spring, which will focus on nachos, tacos and wings.

Whether the food is being served on wheels or within four walls, Mahorn says the Gangster Cheese philosophy is about thinking outside the box.

“You don’t always have to follow the crowd, do your own thing. Grilled cheese doesn’t have to be just bread and cheese  — it’s whatever you want to make it,” he says. “And that goes for life as well.”