PLEASE NOTE: All BACD events/workshops will be held virtually until until further notice.

A Zoom link will be included in the event information, so you can join at the scheduled time.

Brought to you in partnership by the Whitby Chamber of Commerce, Town of Whitby and TD Business Banking, this event welcomes TD’s Vice President & Deputy Chief Economist Derek Burleton to provide his annual update to the Whitby business community. 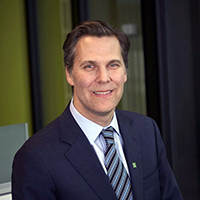 Derek Burleton,
Vice President and Deputy Chief Economist,
TD Bank Group
@TD_Economics
Derek is Vice President and Deputy Chief Economist for TD Bank Group. In his role, he leads a team of economists that provides leading analysis on the Canadian and U.S. economies. Each year, he travels extensively across Canada and the U.S., speaking at more than 75 events on economic and financial developments. As a respected commentator, Derek has been quoted by many media outlets – including the London Financial Times and the Economist. He also is frequently interviewed on the radio and television.
Derek maintains a strong interest in public policy issues, and has written substantive reports on health care sustainability, education and immigration reform. He participates in a number of advisory and steering committees both internal and external to TD Bank Group and currently serves on the Board of the Toronto Association of Business Economists (TABE).
Derek received his Bachelor of Commerce from Queen’s University and an M.Sc. in Economics from the London School of Economics. Derek has more than 20 years of experience as an economist in the financial industry.
Thanks to the Town of Whitby for supporting this event. Here’s why we’re excited about doing business in the Town of Whitby!
Have questions you’d like answered during the event? Please submit them to Daniel.Stober@td.com.
This event will be hosted on WebEx. Participants will be provided with the credentials closer to the event date.
+ Google Calendar+ iCal Export